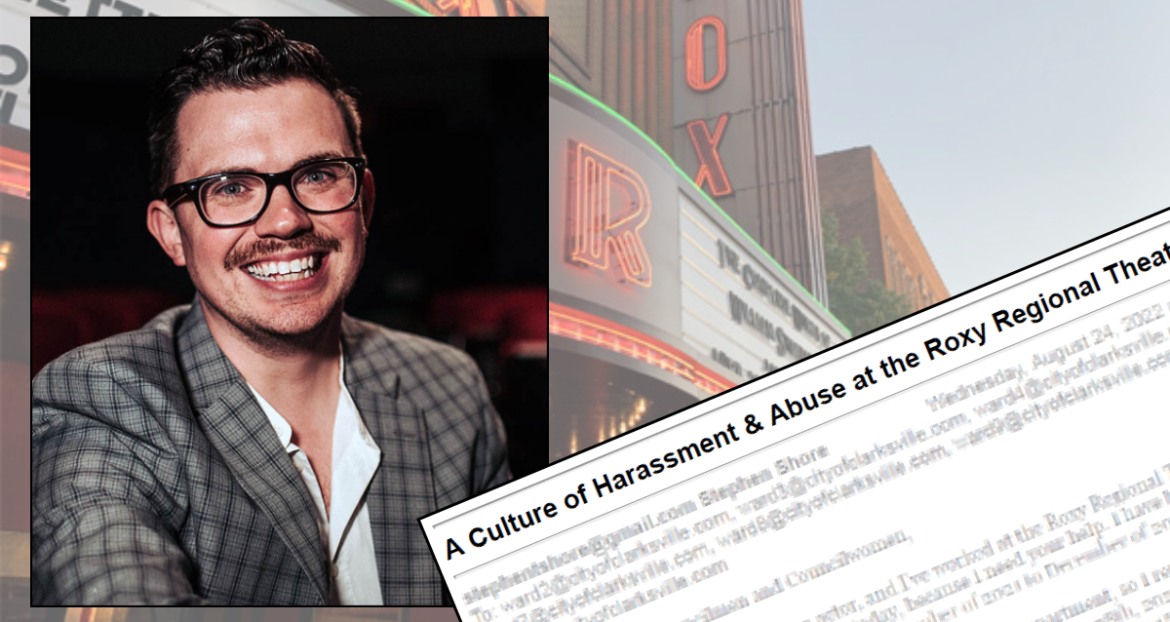 An actor at the Roxy Regional Theatre says he and a dozen others have been victims of harassment and inappropriate conduct by Director Ryan Bowie for at least the past year, with some complaints going back much further. In January, after several actors detailed formal complaints, the theatre’s Board of Directors & the Executive Committee admitted “mistakes have been made” and determined that Bowie, along with other staff, would enroll in “extensive HR training,” and someone on-site would be trained as an “Intimacy Choreographer.” Additionally, an HR Director would be appointed. Now that the city is directly involved with the theatre and its liability, the actors, and some city council members, are still concerned about ongoing issues at the downtown Clarksville landmark and are calling for action — they want Bowie removed as the Executive Director, weary of several lawsuit threats involving his actions.

In November, one of the actors addressed his concerns directly with Ryan Bowie during a meeting that lasted nearly an hour. One of the topics was that Ryan reportedly stuck his fingers in the mouth of an actor and groped another during a performance without prior notice or consent. He says Ryan did not dispute the allegations but rather confirmed them, stating: “it’s a physical show… I don’t understand what the problem is.”

During subsequent conversations with Ryan, one of the actors says Ryan Bowie disclosed that he wanted to “put a gun to his[Bowie’s] head and blow his brains out.” This came after several case disputes and public shaming of cast members. There were multiple complaints of Bowie violating the contracts of the actors, some of who are union employees, and each instance was met with Bowie stating it was for opportunities that couldn’t be missed for the theatre, despite the contract terms with each actor.

A female Black Latin American employee, who reported directly to Ryan Bowie, told him, “My people come from an island, and we need warmth,” after Bowie walked onstage and quipped, “I turned on the heat, you pussies” right before a dress rehearsal for ‘Distracted.’ Bowie reportedly replied, “Bitch, you came from California!” When asked about this situation, Bowie said: “why do I feel like I’m being attacked right now?” according to an email sent to Clarksville’s city leaders about the incident.

Another incident in November details that Ryan was “furiously ripping down the set out of anger” when Don (Donald Groves) appeared in the lobby asking for paper towels, as Ryan had “drilled through the nail-bed of his thumb and was bleeding profusely” after reportedly being upset that he was not included in a photo with the cast (he wasn’t a cast member of the production).

In addition to the theater, there is a ‘cast house’ and employee housing. Bowie once stated in a city council meeting that the theatre must provide housing for some of its employees because of the cost of living in Clarksville, and it’s not feasible for them to have to acquire housing and pay the cost of monthly rent. The complaint alleges that Ryan enters some of the housing as he sees fit, without notice, announcement, or permission.

In December, Ryan reportedly drove his vehicle to the neighborhood of the Cast House and sat just down the street for an hour while texting multiple cast members who were invited to a dinner at the residence. As they were having dinner, they received messages from Bowie stating, “we are all good, right?”, “I miss hanging out with people…”, and “just now I love ALL of you dearly…” which caused alarm to some of the recipients once they realized he was parked just outside the home where he wasn’t invited.

Other concerns are that Ryan Bowie recently started a small business called “City Boy Country Life,” why they say he has used Roxy employees to staff his personal retail venture at times they were being paid from Roxy funds.

The complaint also alleges that the company doesn’t have a specific ‘child wrangler’ for productions that include children and documents multiple injuries to children in the past, including an incident where one child stabbed another.

The Roxy’s Executive Committee responded with the email below, and now the actors are asking the city leaders of Clarksville to take a look at the theatre they are now formally in business with.

The complaint, which was delivered to members of Clarksville’s City Council last week, asks them to investigate their new partnership with the Roxy Regional Theatre and Ryan Bowie. Multiple City Council members are currently looking into the options they have available and have noticed Mayor Joe Pitts their expectations this will be fully investigated and addressed before it becomes a liability for the city.